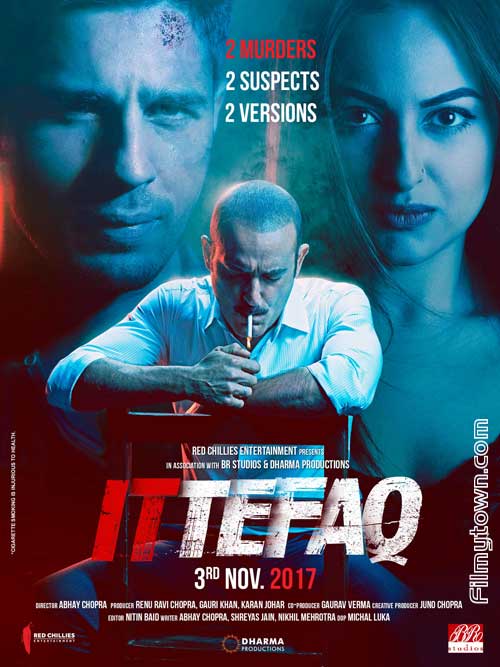 Brilliant performances from Akshaye Khanna and Sidharth Malhotra are the mainstay of this murder-mystery suspense thriller that keeps you engrossed throughout the movie culminating into an unpredictable end. Ittefaq movie review... Directed by Abhay Chopra, it is based on and inspired on his grandfather B R Chopra's Ittefaq (1969) which was a Rajesh Khanna-Nanda starrer with a contemperory adaptation and a complete change in the climax from the original film. The film does not have any songs which lends seriousness to the high-profile double murder investigation lead by the no-nonsense Police Officer Dev (Akshaye Khanna). It begins on a rainy night where a Noted novelist and a NRI Vikram Sethi (Sidharth Malhotra) has just launched his new book and returns to his hotel only to find his wife murdered and lying still on the floors. Vikram calls the police who instead begin to doubt h ....
Read More 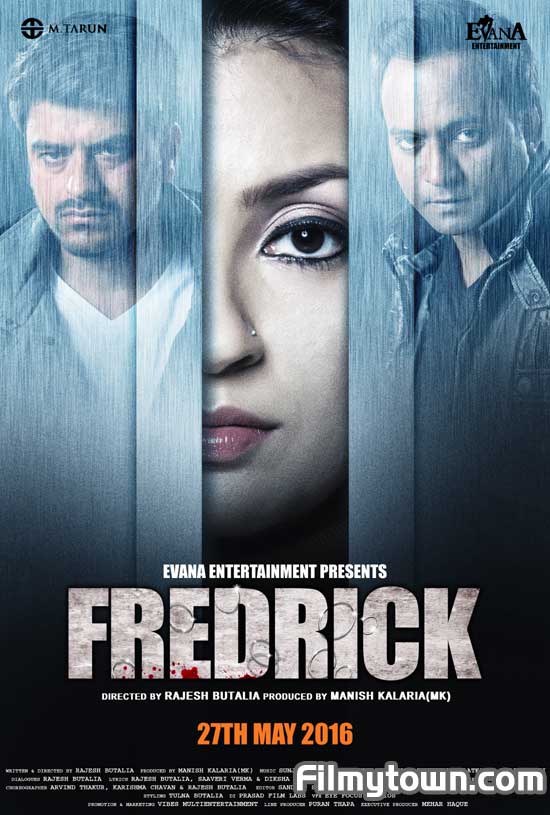 An intriguing story line with deftly guarded suspense which keeps one on the edge of the seat. (Fredrick - Hindi movie review) The story begins with a 16 year old boy, who seems just like all other guys , except than that his bonding was unusual with another boy of his age. This bonding was highly objectionable to his father and he has reacted violent on that another guy. One fateful day few unfortunate events take place and this creates the platform for the story to grow further. Then it takes a leap of 19 Years and shifts to the picturesque Mussoorie. In the breathtakingly gorgeous valleys and beautifully draped snow covered mountains of Mussoorie, a dark unknown shadow has cast a web of Human trafficking, whom nobody knows and no one has seen. The suspended Intelligence Bureau agent Vikram (Avinash Dhyani) gets to know that sister who had gone to Mussoorie is miss ....
Read More 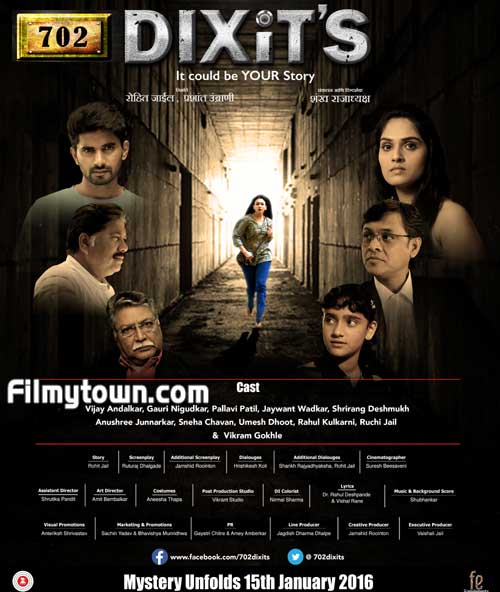 A small budget gripper from the Marathi stable. It could happen to you is the apt tagline. A day to day story a housemaid is thrown off the balcony of the flat 702 of Pune's highrise Rosemary Society. Kaavya (Gauri Nigudkar) and Yash Dixit (Vijay Andalkar) are a jet couple leading a blissful life along with their 10 yea old daughter Reva (Ruchi Jail). Their perfect life comes to a grinding halt when the governess Asha (Anushree Junnarkar), they had hired a while back to take care of Reva, falls from their balcony and dies. The man of the house has taken leave and is working from home. It is a point worth a wonder - It is a great boon or a bane of tech workers? Since Yash is the only family member at home on that fateful day, he is arrested on suspicion of murder. Yash pleads his innocence to the cops and to Kaavya. But all evidence including Asha's father, Raoji points out ....
Read More 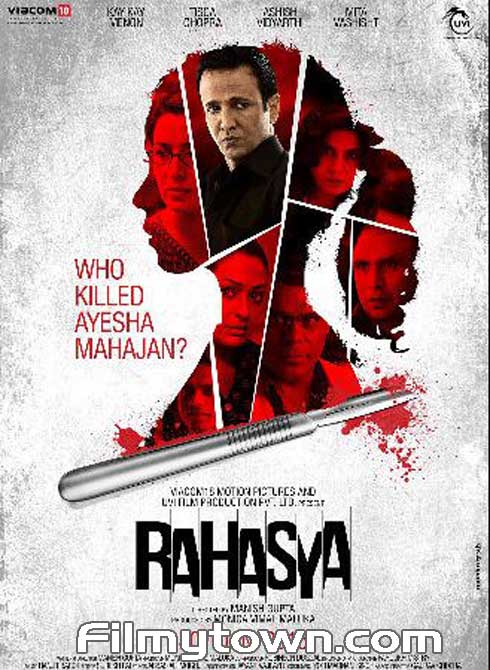 There are several films which have come previously on Murder Mystery like Superhits MURDER. Its obvious when a movie come on this subject, it has to suspense based with Drama added on who is the Murderer. Lets see now what is the RAHASYA of upcoming movie releasing today? Rahasya is story of Ayesha Mahajan (Sakshi Sem) who gets murdered at her residence in night and only when her maid Remi Fernades (Ashwini Khalsekar) comes to give Tea, she is shocked to see the Murder of Remi. Then Police come and whole investigation starts on on "Who is Murderer"? This 18 year old girl is murdered in her own house and her father Sachin Mahajan (Ashish Vidyarthi) is deemed the prime suspect for the murder. Read More 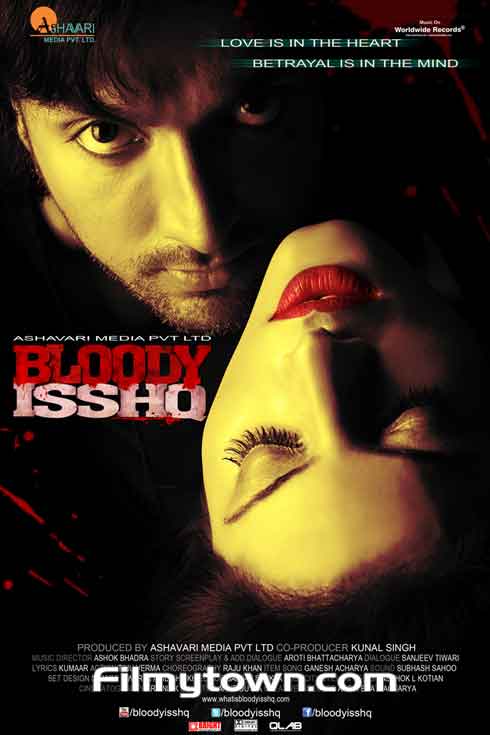 This bollywood thriller begins with a ruthless murder of a lass in the parking area in Bangkok. It revolves around the three characters and the relationships between Nirvaan, Natasha and Radhika. Natasha is a man-eater and a wager from a friend starts the game of seduction between Natasha and Nirvaan. But things take a complete twist when Natasha actually falls for Nirvaan’s charms unaware of the fact that Radhika is a part of Nirvaan’s life and Nirvaan is upto something which Natasha had not thought of... what follows is a trail of love and betrayal... Nirvaan Shroff (Akash Singh) is a grungy mysterious singer in the back alleys of Bangkok. Few people know his whereabouts, a chronic recluse which is very evident in his subliminal sociopathic messages in his lyrics. Misery haunts him yet he is a person of interest to all around him, most of whom don't really know that he mas ....
Read More 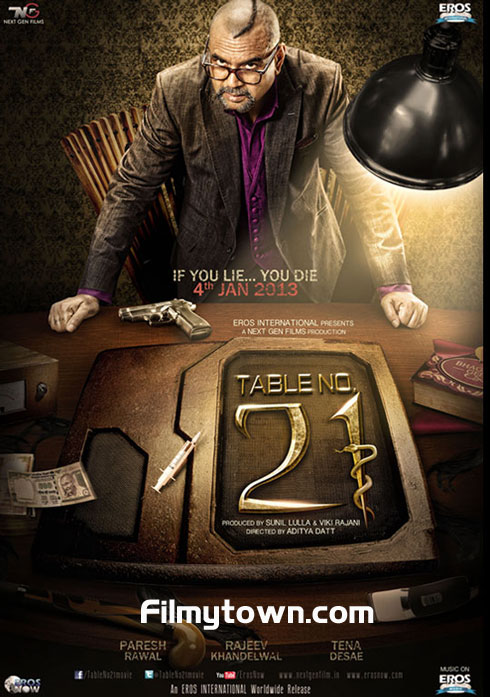 Table No. 21, an ambitious venture of the Next Gen Productions and Eros International, produced by Vicky Rajani and Sunil Lulla. Directed by Aditya Datt it is one of the first releases of the year 2013.   Table no. 21 is a story revolving around a young married couple Vivaan Agasthi (Rajeev Khandelwal) and Siya Agasthi (Tena Desae) who are madly in love with each another.  They are going through a financial low, are excited to win an all expense paid trip toFiji.   They have a romantic time there when they receive an invitation for an exclusive lunch to celebrate their wedding anniversary. There they meet Mr. Khan (Presh Rawal) who is the owner of the resort.   The three talk, have a few drinks and share their thoughts when Mr. Khan tells the lovely couple about an online game called Table No. 21 which could give them a chance at winning 21 Crores Rupees.   T ....
Read More 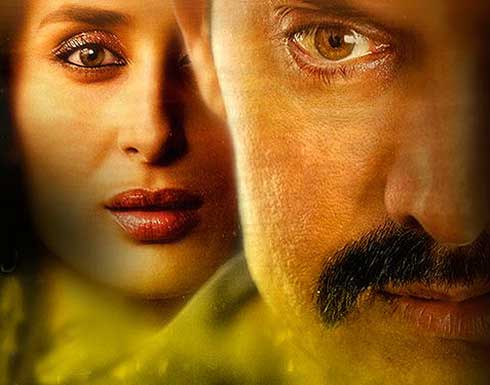 An exceptional suspense thriller with an unusual narrative, unlike other edge of the seat thrillers, this one has a narrative never seen before in hindi cinema. Talaash is an psychological suspense thriller. During the course of investigation of an accidental death of a superstar Inspector Shekhawat (Aamir Khan) experiences an inner guilt of the loss of his son. The case turns into a life altering chase for Inspector Shekhawat when he is forced to reel under the repercussions of a broken married life with wife and come face to face with his suppressed grief of drowning of his son. In recurring outbursts of anguish, Shekhawat visualizes various options he could have taken to avoid the accident. Shekhawat is simultaneously engrossed in the investigation as well as the “I could have done this … or that…” which could have prevented his son’s accidental death. The film begins wi ....
Read More
« 1 2