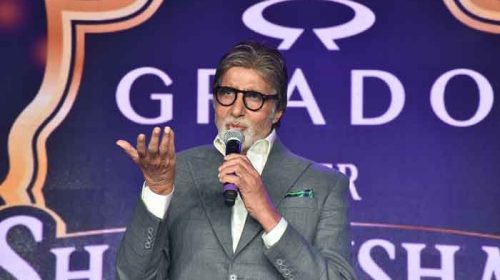 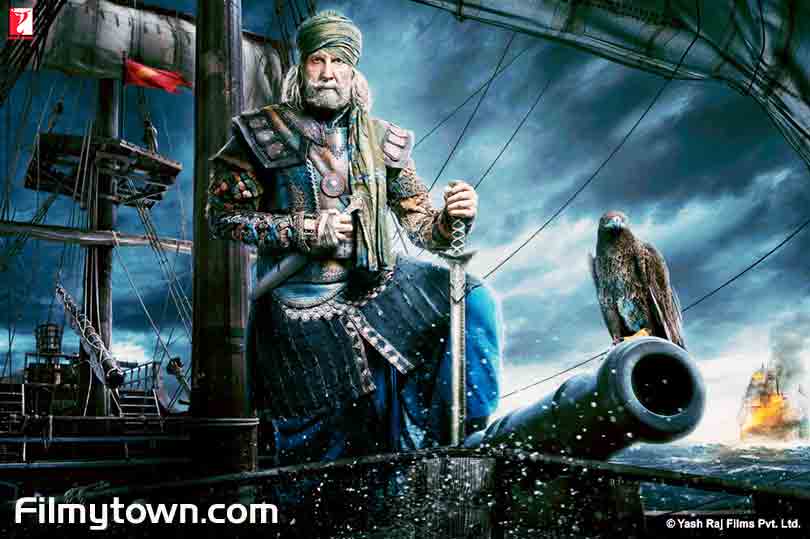 This epic action-adventure film has Aamir Khan and Amitabh Bachchan in lead roles. The story Written and directed by Vijay Krishna Acharya who earlier directed the blockbuster hit Dhoom 3. Thugs of Hindostan movie review... Produced by Yash Raj Films Thugs of Hindostan is set in 1795 and is a fictional story about the initial revolt by the Hindustanis during the early British Raj days when they set foot in India under the guise of East India Company. In the film, the Britishers refer to this gang of fighters who fight the East India Company to get back their kingdom as 'Thugs' (Bandits). They aren't bandits or criminals from the Indian perspective as they are fighting for what was snatched away by the 'whites'. Khudabaksh Azaad (Amitabh Bachchan) leads the band of Thugs aspiring to free Hindostan (the Indian subcontinent) from the cluthes of the expanding British East India Comp ....
Read More 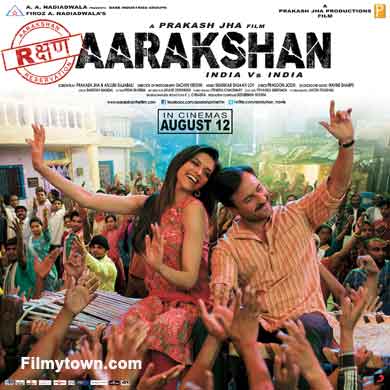 Here is a high voltage drama based on one of the most controversial policies of caste based reservations in government jobs and educational institutions. Aarakshan movie review... Aarakshan is the hindi word for ‘Reservation’. In India there is a caste based reservation of jobs in government and educational institutions. Prakash Jha, the director has presented complex social and economic issues in a very simple format. It is the story of Prabhakar Anand (Amitabh Bachchan), the legendary idealistic principal of a college that he has single-handedly turned into the state’s best. His loyal disciple, Deepak Kumar (Saif Ali Khan) who will do anything for his Sir. Of Deepak’s love for Prabhakar’s daughter, Poorbi (Deepika Padukone), of his friendship with Sushant (Prateik). It is the story of... their love, their lively friendship, their zest for life, and of their dreams fo ....
Read More 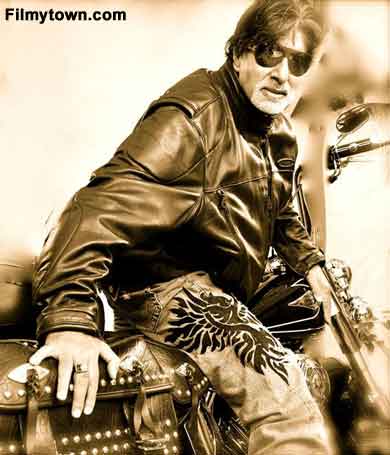 The magic is still there, the appeal is still evident the moment he appears on the screen and his dialogues in that baritone voice. It is Amitabh Bachchan returning as the angry ‘young’ man. But Bbuddah Hoga Terra Baap is full of flashy dresses, over the top acting in a film which leans on a thin storyline. Puri Jagannadh, the Telugu film director makes the 69-year-old Amitabh Bachchan enact the role of a defiant, flashy hit man in his angry young man of the 70s and 80 style. Dare not call him a ‘Buddah’, lest you face his anger. Single handedly he handles the baddies, but also has a soft side too. He gets the best lines to deliver which make the audience clap and cheer at several occasions. 'Vijju is a contract killer who returns to Mumbai after being in Paris. It will be his last assignment of his profession. He is flamboyant, arrogant and hits back to those who call h ....
Read More 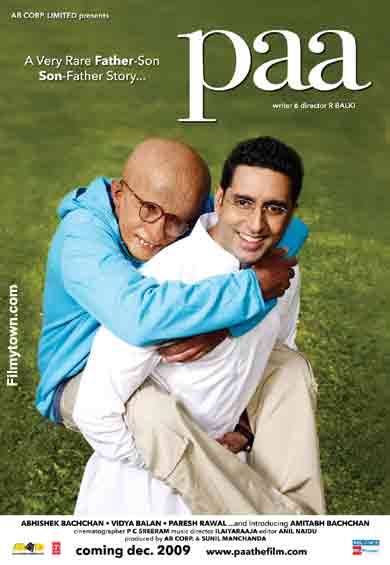 Paa is made by R. Balki who has penned the offbeat hit Cheeni Kum. He takes to direction with Auro which is as impressive as his first film. Paa movie review... Auro (Amitabh Bachchan) is an intelligent, witty 13 year old boy with an extremely rare genetic defect that causes accelerated ageing. He suffers from a progeria like syndrome. Progeria is a debilitating disease where the child ages rapidly beyond his age. Kids affected by this problem lose all their hair, become bald and their veins begin to show prominently on their heads, which enlarge to a size beyond normal. Their teeth and eyes suffer also. Mentally he is 13, very normal, but physically he looks 5 times older. In spite of his condition, Auro is a very happy boy. He lives with his mother Vidya (Vidya Balan) who is a gynecologist. Amol Arte (Abhishek Bachchan) is a young progressive and a full of ideals politician ....
Read More 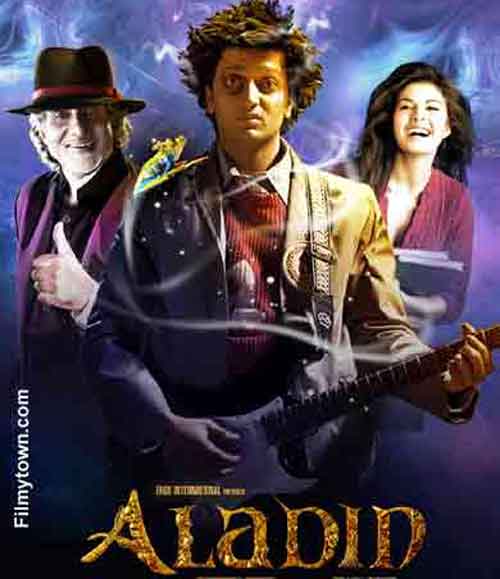 From the land of myths and legends - India - comes a fantasy adventure for the entire family. Directed by Sujoy Ghosh, Aladin is a modern re-imagining of the classic tale of 'Aladin and the Magic Lamp'. Aladin movie review... Aladin Chatterjee (Riteish Deshmukh) lives in the city of Khwaish, an orphan who has been bullied since childhood by Kasim (Sahil Khan) and his gang for being the namesake of the fairy tale character. Often his classmates ridicule him by making him rub lamps through which no genie emerges. Poor Aladin. One fine day, his life changes when Jasmine (Jacqueline Fernandez) gives him a magic lamp - because it lets lose the genie Genius (Amitabh Bachchan). Much to his disbelief, the Genie (Amitabh Bachchan) does come out of the lamp. Genius is on the verge of retirement and has his last three wishes to grant to his final master Aladin. Ideally one would expect ....
Read More 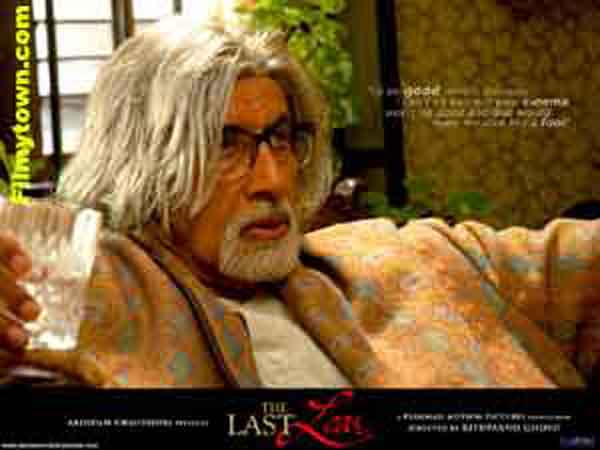 The Last Lear is inspired by the famous Bengali actor, activist and playwright Utpal Dutt and his play "Aajker Shahjehan" (The Emperor Today). The play was about the enormous trust and faith that actors repose on those who support their art. Just as much as it is about the betrayals of that very trust. The Last Lear having a Bollywood star cast is an English language film. It has Amitabh, Arjun Rampal and Preity couldn't have been more perfect. Amitabh hogs the limelight not in as towering personality, but as Harish Mishra. Harish Mishra (Amitabh Bachchan) is the protagonist of this offbeat film. The film-within-the film is a lamentation about the dying art of the circus. As winds of change accompanying neo-liberal policies sweep across the country, older cultural forms give way to newer ones. In this moment of transition, trust and treachery collide and crumble. What does a 65 ....
Read More 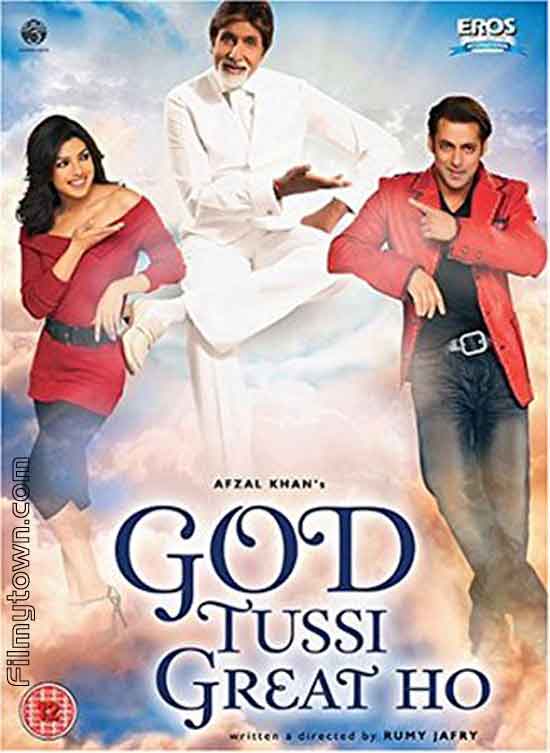 God Tussi Great Ho is a comedy bollywood film inspired by the American movie Bruce Almighty. The story is a simple in this sober and clean film which also carries a message.

A comedy in the beginning, it shifts its emphasis to other social issues.

Arun Prajapati (Salman Khan) is still struggling to be a successful TV anchor, but accomplishment has always eluded him. Frustrated, he blames it on God (Amitabh Bachchan) for not achieving his goal. Arun is head over heels in love with Alia Kapoor (Priyanka Chopra), a popular TV anchor working in the same channel. Having a complex within him, he has never been able to express his love for her. Arun feels more unsafe when Rocky (Sohail Khan) joins the channel as an anchor and he starts believing that Rocky will win Alia. Underperforming and being distraught, Arun is expelled from the channel. At the end of the worst day in his ....
Read More 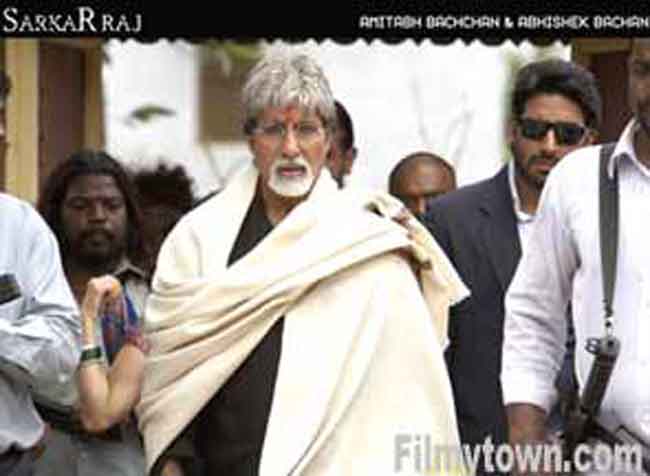 Sarkar Raj is sequel of film Sarkar directed by Ram Gopal Verma. The plot has surprising twists and turns. It has tight screenplay, powerful dialogues, excellent cinematography and impressive close ups. Right from the opening sequence in the film Sarkar Raj, Shankar (Abhishek Bachchan) is seen holding a cup of tea in front of his face. It is similar to Sarkar in the original as a symbolic gesture that he has now taken over the command from his father Sarkar (Amitabh Bachchan). The story is that Anita Rajan (Aishwarya Rai) is the CEO of a Sheppard Power Plant, an international company brings a power plant proposal to set up in rural Maharashtra before the Nagres, something the state desperately needs in times of power shortage. A similarity with the Enron project in Maharashtra, which has its opposition and troubles. Anyway, it is vague that the CEO of a Multinational company large ....
Read More 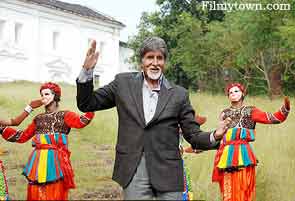 It is believed that children have the strongest connection to God. In Bhoothnath, it is shown that they have the ability to perceive goodness in everything and everyone. It is believed a mother's love is selfless. But a child's love can transform relationships; it comes with no expectations and no boundaries. Their love can make you believe in miracles. This is a story about a seven-year-old naughty yet innocent boy, who unknowingly turns a foe into a friend. The film is about Banku and his friend, Bhoothnath…about innocence, honesty and the pure love of a child. A story about a little innocence, a little playfulness, and a lot of emotions that will touch hearts. This is a story that will show adults to see the world through the eyes of a child… an angel, a creation of God. It's then that one will realize what a beautiful world they live in after all. Bhoothnath begins with ....
Read More
1 2 »