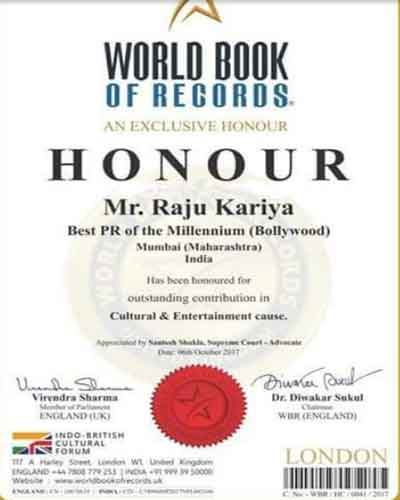 Bollywood industry’s most trusted PRO Raju Kariya will be honored by the stalwarts of Bollywood fraternity on January 17 in Mumbai. Beginning his journey in Bollywood with modest beginnings, this humble person from Amravati has made a mark not only in Bollywood and Television industry, he has gained popularity amongst the Indian diaspora in other countries. The guest of honour will be the India’s Only Independent Lady Member of Parliament from Amravati Smt. Navneet Rana with her husband M.L.A Ravi Rana who would be felicitating Rajubhai.

Probably Raju Kariya is the only PRO of Mumbai’s Bollywood industry who has relentlessly pursued the Public Relations in the filmy town since the last 50 years. Not only this, he has achieved several landmarks, created unparalleled milestones and broken all the records in the history of the filmy industry of India.

A remarkable feat achieved by Raju Kariya is that on 31st of December in 1988, he is the only filmy PRO in the world to have managed Mahurats (Launches) of 15 films ON A SINGLE DAY. This is an unparalled achievement ever in the Bollywood, Hollywood and any other film industry of the world.

Rajubhai has managed Public Relations of the Mahurats of over 1,000 films and has successfully overseen the release and PR of 650 odd films. Mr Kariya’s work spans over 50 years and he is the only PR to have worked for the 3 generations of the first family of Bollywood film industry from Raj Kapoor Sahab to his son Randhir Kapoor and then also for his grand daughter Karishma Kapoor.

To name some of the bigwigs of the filmy industry, Raju Kariya has seen the PR for Raj Kapoor, Dilip Kumar and Dev Anand’s times to the film artists of the present generation.

Conferred with President’s Award by none other than Ex-President of India, late Shri K N Narayanan, Raju Kariya has then been felicitated by the ex Lok Sabha Speaker Smt Sumitra Mahajan with PRO of the Millennium’ and later on by ex Union Law Minister Late Shri Ram Jethmalani as the Best PRO of the Bollywood Award.

The year 2020 begins with another felicitation awaiting Raju Kariya with the ‘Glorious Service to the Bollywood’ award by Rajesh Shrivastav of Films Today and Nani Nani Foundation will honor him at the Dream Achievement Award event on the 17th of January at a glittering function amid the presence of cream of celebrities from the Bollywood, politicians, sportspersons, corporate achievers and philanthropists.

The highlight of the evening will be the presence of the only Independent female Member of Parliament from Amravati, Shrimati Navneet Kaur Rana and her husband alongwith Achievers from political fields in the presence of senior ministers, MPs and MLAs.

One of the most promising actors in the...
Features Latest News

Still a part of film fraternity, but now it’s on a global level, says Reeth Mazumder

Lazing around, trekking and Monochrome shades of Harshita Gaur