Seen through the eyes of a police officer, ‘Once Upon A time in Mumbaai’ traces the changing face of the Mumbai underworld and how it all started.

The film, set primarily in 1970s Mumbai, follows the rise of Sultan and the conflict, when his protégé Shoaib challenges his supremacy, and usurps power to rule the murky underbelly of Mumbai. Once Upon A Time in Mumbaai movie review…

ACP Agnel Wilson (Randeep Hooda) is one man who thought could save Bombay. On a mission to clean up what he calls the murky filth of the city, it seems that his ambition has driven the city to a brink of destruction.

Sultan Mirza (Ajay Devgn) starts early in his life in the business of smuggling gold and grows up to become a very strong and powerful man of Bombay. With his might and wisdom, and for peace in the city, he divides and allocates Bombay into different zones to the smugglers of that time. Nothing remaining on the land, he chooses the seashore of Bombay for himself. Sultan soon becomes messiah of the people often rescuing poor in difficult situations and with charity to needy.

Shoaib Khan (Emraan Hashmi) the spoiled son of a police inspector is a small time thief. Fed up with the lad, Shoaib’s father requests Sultan Mirza to guide him in this regard so Shoaib then happens to work with Sultan Mirza in the smuggling business. Shoaib Khan soon proves his capability of working for Sultan Mirza and Sultan increasingly relies on this young man till a time comes when the protégé overrules his mentor’s set of rules, and this point onwards, there are problems and then enmity between the two.

Sultan Mirza is the Messiah of the poor, fear of the rich and authority of the powerful. Sultan was the one whom people turned to when there was nowhere else to look. The silent ruler of the streets of Bombay, he did everything that was wrong according to the law, but right according to him. Armed with his muse Rehana (Kangna Ranaut) on one side and a gang of loyal allies on the other, Sultan Mirza took it on himself to give the people what they wanted and what they deserved.

Running around trees and fighting four goons at a time, Rehana is the filmstar who lost her heart to a thief becoming his strength as well as his weakness. This bold and fearless beauty will bring down anything and everything that stands in the way of her one true love Sultan.

Shoaib Khan is the evil prince who fears no one, who loathes everyone and who wants to be the only one standing tall amidst a sinister battle for power. Looking down upon the ash at his feet as he rises up like a burning flame, Shoaib is the nightmare that the city hoped would never come alive.

Mumtaz (Prachi Desai) is the innocent confidante of a guilty ruffian Shoaib Khan. She is entangled in a web which includes her lover’s desire to make it to the top of the crime ladder and her inability to get out of this tumultuous relationship. 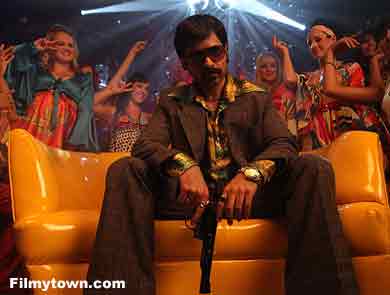 Though its mentioned that all events and characters in the film do not resemble any person living or dead, yet the narrative does resemble the times and lives of Haji Mastan (played by Ajay Devgn) and Dawood Ibrahim (played by Emraan Hashimi).

Milan Luthria’s expert story telling and an engrossing screenplay keeps you hooked until the pitiable end of Sultan Mirza’s life. Shoaib’s character has been gifted with gritty punch lines, but it is the character of Sultan Mirza which is impressively portrayed by Ajay Devgan. Randeep Hooda is remarkable in his short role as the ACP.

Once Upon A Time in Mumbaai is presented in a retro chic style and is a glamorous and powerful rewind to the golden era. The film’s unit and especially the costume designers deserve praise for giving the film that authentic feel.

Crew of Once Upon A Time in Mumbaai:
Art – Nitin Desai