Hon’ble Governor of Maharashtra Shri Bhagat Singh Koshyari unveiled the poster and the trailer of an upcoming light comedy film Shalini Shah’s directorial Samosa and Sons at the Raj Bhavan in Malabar Hill, Mumbai on 4th of October 2021. Shalini has won the National award for the film ‘From the land of Buddhism to the land of Buddha’ which was selected in Message to Man Film Festival, St. Petersburg, Russia.

The film is about a submissive man from a small town married to a modern Delhi girl is brainwashed into producing a son by his dead father’s ghost. In time he is hit by a startling realization. Samosa and sons calls out the patriarchal conditioning in the society, no matter how modern we may appear but the desire of a son has a deep rooted conditioning.

The trailer depicted comedy, sarcasm and the ills of patriarchal mentality which still exists in the vast interiors of our country. The film carries a strong social message.

FilmyTown editor Paresh B. Mehta has a brief chat with Shalini Shah: 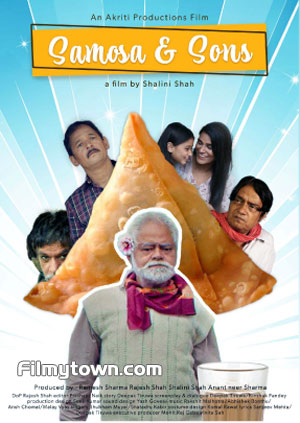 What is the relevance to the title Samosa and Sons to the subject of your film?
The title in itself underlines the legacy of the shop in the film. ‘Samosa’ is the identity of the Koranga family who are well known for their famous samosa shop and ‘Sons’ denotes the compulsion or the male heir that carries their legacy forward from generation to generation.

Is the film aimed at the festival circuit? What is your target audience?
It is the general masses that the film is addressed to. A small towner to an urban techy would relate to the story that is realistic and I would say that it is a film that will be enjoyed by the family audience.

Could you speak a bit about the film’s shooting locations and whether you received any support from the locals?
Samosa and Sons has been entirely shot in actual locations across Uttarakhand. Since I am from Uttarakhand, I did receive a lot of support from all the natives. The film takes place in the hills hence my hometown became the best place to shoot. Moreover, the background of the protagonist is from the remote hills of Uttarakhand as I wanted it to appear as a realistic film that the viewer could identify with.

How was the experience while shooting the film?
The film was shot in COVID times, which is actually a very unusual time. We faced many difficulties regarding permissions and RTPCR tests and followed all the Covid norms. Shooting in those times was very unique and unusual. It took a lot of planning and coordinating all the actors who are actually from Bombay and they arrived in the month of August, 2020. I would say that the organizational work was a huge task as compared to the creative tasks pertaining to actual shooting.